Last month, on my way to a hospital in Thiruvananthapuram I saw a tall cotton tree carrying brown pods about 4” to 6” long, some open and spewing white cotton into the wind.

As a young girl in my Ammoomma’s home, I, alongside my sisters and cousins, extracted the fluffy white stuff that transformed into cotton. 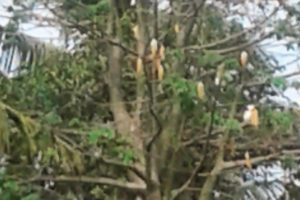 That tree that gave us cotton for our mattresses was called the ‘Elavu.’

In the beginning of Summer, end of February to early March, dry brown pods from the flowers of the Elavu trees, also called Silk-cotton trees, were delivered to my Ammoomma’s house. Three to four bags almost as tall as me, and I was about three or four feet tall then, making a crinkling noise as they were moved, intrigued me. As I saw one opened, oval shaped brown pods, some cracked open were spewing white cotton puffs into the air. I remember the first time I caught one. It felt soft and fluffy.

I was told they came from our own trees that grew in one of the properties Ammoomma owned in the suburbs of Trivandrum.

After the morning chores, the cook, the outside maid and we the children gathered around the pods, and sitting in a wide circle handled them. An adult cracked the pods with a round stick, and passed them to the next in line. My sister, cousin and I opened the pod, released the white cottony stuff, and put it into a barrel placed in the center of our circle. 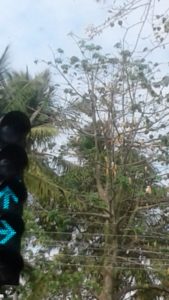 The oldest among us, (usually my Kitchen Ammoomma,) told us stories of where our doctor Ammoomma grew up. She also told us about different pieces of property that Ammoomma had purchased, and how some of it got leased to other people for farming. The Elavu trees were one such crop, and how every summer we got a share of the crop for our family.

When the barrel was about two-thirds full we stood up, and using a wooden lathe, similar to the ones used to churn butter, churned the cotton. The fluffy stuff rose to the top and the brownish-black seeds fell to the bottom. The tallest in the group then picked up the cotton and stuffed them into jute bags.

As I remember, this was sent to a seamstress who made pillows and mattresses. When the mattresses we were using lost their fluffiness, they were emptied of the old cotton and refilled with the new fluffy stuff. Same thing was done to our pillows also.

Now–a-days I don’t see anyone fluffing the cotton. They probably have small factories that do this.

I am wondering how the young ones are learning stories of yore, if they are not gathering together to do chores like getting out the cotton, or helping to grind and other grains….. Now, that is another story yet to be told!!!

This site uses Akismet to reduce spam. Learn how your comment data is processed.